There has been a tremendous amount of news lately about weather including the approaching Hurricane Isaac churning in the Caribbean Sea and set to arrive in the Gulf soon.

The summer has been hot with July being the warmest ever on record. A new scientific study indicates the drought in the North American West is/was the worst of the last 800 years with major impacts to the carbon cycle and hints of even drier times ahead (July 29 in Nature-Geoscience).  "This will also would trigger a whole host of significant water resource challenges in a region already subject to frequent water shortages.”

Scientists are watching the Pacific looking for the developing El Nino which currently seems to be neutral.

But what the heck has been going on in the Arctic? What is the state of the ice pack this season? Is the infamous Northwest Passage open again? As many of you know this is my main interest having sailed through both directions in 2007 (E-W) and 2009 (W-E).

I am absolutely astounded by the loss of ice this summer up north. There is literally no ice in all of Baffin Bay all the way north to Thule some 500 miles north of the Arctic Circle. As one crosses Baffin Bay traveling west and enters the Northwest Passage in Lancaster sound the story remains the same, clear sailing all the way to the remote village of Resolute. Again, absolutely NO ice. 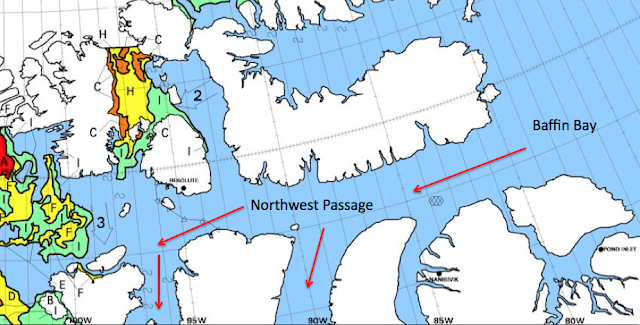 A very rare Arctic/polar storm this month has shuffled the entire polar ice cap around and exposed a lot more ice to the melting conditions. Scientists will be studying the combined effects of excessive wind with the warmer infusion of water on the ice pack in the months ahead as the 2012 summer melt season continues to break all known records.

The loss of our northern polar ice cap should be the biggest news in the history of news cycles but for some reason it just doesn't get much play. Is it just too profound for folks to comprehend or believe? If we were watching another planet's polar ice cap disintegrating before our eyes it would be an unbelievable event in history and yet we continue to have a debate about whether climate change is really real or just a perpetuated "hoax."