GREENBELT, Md. -- Researchers and flight crew with NASA's Operation IceBridge, an airborne mission to study changes in polar ice, began another season of science activity with the start of the 2012 Arctic campaign on March 13. From mid-March through mid-May, a modified P-3 from NASA's Wallops Flight Facility in Wallops Island, Va., will conduct daily missions out of Thule and Kangerlussuaq, Greenland —with one flight to Fairbanks, Alaska and back—to measure sea and land ice. The campaign will also feature instrument tests, continued international collaboration and educational activities. 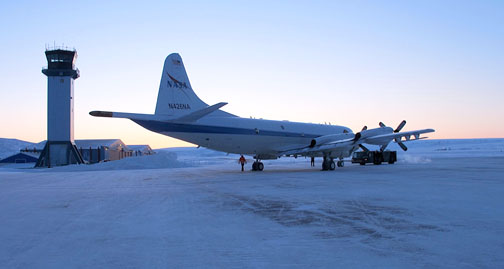 After NASA's Ice, Cloud and Land Elevation Satellite's (ICESat) stopped collecting data in 2009, Operation IceBridge began as a way to continue the multi-year record of ice elevation measurements until the launch of ICESat-2 in 2016. IceBridge gathers data during annual campaigns over the Arctic starting in March and Antarctic starting in October.

IceBridge flights will measure both previously surveyed sites, such as Greenland's Jakobshavn Glacier, and unstudied areas of sea ice, such as the Beaufort Sea north of Alaska. "The most important sea ice flights are the transits between Thule and Fairbanks," said IceBridge project scientist Michael Studinger.

The P-3 carries an array of instruments for measuring ice surface elevation and thickness and snow depth, and will be joined by other aircraft later in the campaign. The Airborne Topographic Mapper uses lasers to measure changes in surface elevation and uses these readings to create elevation maps. Radar instruments from the Center for Remote Sensing of Ice Sheets at the University of Kansas in Lawrence, Kan., show snow and ice thickness and allow scientists to see through land ice to the bedrock below. A gravimeter from Sander Geophysics and Columbia University's Lamont-Doherty Earth Observatory, Palisades, N.Y., similarly lets researchers determine water depth beneath floating ice.

A Falcon jet from NASA's Langley Research Center in Hampton, Va., carrying a high-altitude laser altimeter, the Land, Vegetation, and Ice Sensor (LVIS) will join the P-3 on April 19. The Falcon flies higher and faster than the P-3, which allows it to cover longer flight lines and enables LVIS to survey a 2-km (1.2 mile) wide swath of ice. The Falcon will play a critical role in surveying near coastal areas of Greenland, and in sea ice flights out of Thule.

IceBridge will also join in efforts to validate and calibrate sea ice measurements by CryoSat-2, the European Space Agency's ice-monitoring satellite. ESA's airborne calibration campaign, CryoVEx, aims to ensure that CryoSat-2's radar readings are accurate. "One of our prime goals in Thule will be to underfly a European CryoSat sea ice track within two hours of its passage over the sea ice north of Greenland," said acting project manager Seelye Martin.
Posted by David Thoreson at 2:35 PM 1 comment:

The 2012 Arctic ice outlook is mixed. Any Arctic vessels looking to transit the Northwest Passage will have a much better chance entering from the Atlantic and Baffin Bay vs the Bering Sea. There will be delays in the shipping season through the Bering and Chukchi Seas as they have had a tremendously challenging winter throughout these areas as the National Snow and Ice Data Center lays out below:

Overall, Arctic sea ice extent remained lower than average in January. However, in the Bering Sea, ice extent was much greater than normal. The heavy ice cover caused problems for fishermen and made for an arduous late-season resupply mission to Nome, Alaska. The Arctic Oscillation, which had been in its positive phase most of the winter so far, switched to a negative mode, bringing cold weather to Europe and changing the direction of sea ice movement. 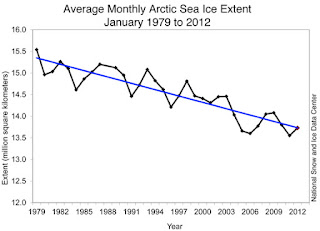