Wisdom from the Titanic and James Cameron

Famed filmmaker James Cameron has metaphorically summed up what the human race is facing from climate change by his reframing the Titanic story:

"Part of the Titanic parable is of arrogance, of hubris, of the sense that we’re too big to fail. Well, where have we heard that one before? 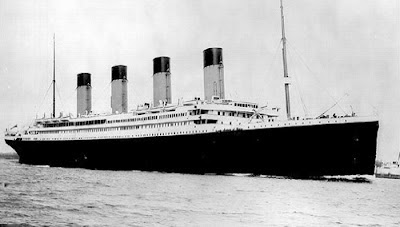 There was this big machine, this human system, that was pushing forward with so much momentum that it couldn’t turn, it couldn’t stop in time to avert a disaster. And that’s what we have right now.

Within that human system on board that ship, if you want to make it a microcosm of the world, you have different classes, you’ve got first class, second class, third class. In our world right now you’ve got developed nations, undeveloped nations.

You’ve got the starving millions who are going to be the ones most affected by the next iceberg that we hit, which is going to be climate change. We can see that iceberg ahead of us right now, but we can’t turn.

We can’t turn because of the momentum of the system, the political momentum, the business momentum. There are too many people making money out of the system, the way the system works right now, and those people frankly have their hands on the levers of power and aren’t ready to let ‘em go.

Very well said Mr. Cameron.
Posted by David Thoreson at 7:54 AM No comments: