A year ago we on Ocean Watch rolled through Bellot Strait and into ice-free water on our way to complete the Northwest Passage. As of today the passage is completely open, although not the Bellot Strait route this year. The traditional Amundsen route north south through Peel Sound is allowing boats traversing the passage through from both directions as this ice chart shows. 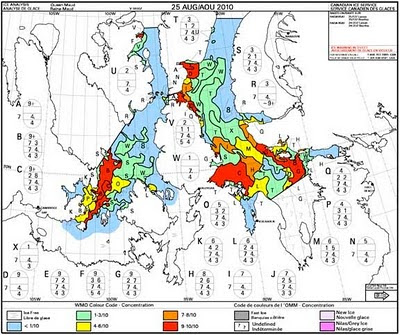 Posted by David Thoreson at 2:22 PM No comments:

Thought it would be a good time to check in on this year's Northwest Passage conditions. As of this past weekend, the passage is open and boats are now moving through from both east and west.

Ice conditions have once again deteriorated and it appears the fabled NW Passage will be free of ice through September and once again a record number of boats will make the long traverse through northern waters.

This year's loss of ice could rival the record year of 2007 when we on Cloud Nine were the first American boat in history to go east to west, Roald Amundsen's route. We will have the data the end of September.
Posted by David Thoreson at 9:38 AM No comments:

Back looking at Climate Change

Now that the Around the America's expedition is wrapped up it is time to refocus on the lessons learned from the voyage and also what is taking place this summer.

For years we have all been reading about the side effects of "climate change" and one of the biggest is erratic changes in local weather patterns. While east coasters were pooh poohing global warming after their cold, snowy winter, the weather heated up and the four warmest months in history were recorded. This follows exactly as scientists have been predicted. There is weather and there is climate and there is a huge difference in the two.

Here are a few examples of the crazy, erratic weather taking place worldwide, including right here on the "Midwest Coast" of the Iowa Great Lakes where I live:

It has been the hottest summer ever recorded in Russia, with Moscow temperatures topping 100 degrees Fahrenheit for the first time. Russia’s drought has sparked hundreds of wildfires in forests and dried peat bogs, blanketing Moscow with a toxic smog that lifted yesterday after six days. The Russian capital’s death rate doubled to 700 people a day at one point. The drought reduced the wheat harvest by more than one-third.

The 2007 Intergovernmental Panel report predicted a doubling of disastrous droughts in Russia this century and cited studies foreseeing catastrophic fires in dry years. It also said that Russia would suffer large crop losses.

The heaviest monsoon rains on record, 12 inches in one 36-hour period, have sent rivers rampaging over huge swaths of countryside, flooding thousands of villages. It has left 14 million Pakistanis homeless or otherwise affected and killed 1,500.

The government calls it the worst natural disaster in the nation’s history.

A warmer atmosphere can hold and discharge more water. The 2007 report said rains have grown heavier for 40 years over north Pakistan and predicted greater flooding this century in south Asia’s monsoon region.

China is witnessing its worst floods in decades, the World Meteorological Organization says, particularly in the northwest province of Gansu. There, floods and landslides last weekend killed at least 1,100 people and left more than 600 missing, feared swept away, or buried beneath mud and debris.

The Intergovernmental Panel reported in 2007 that rains had increased in northwest China by up to 33 percent since 1961 and that floods nationwide had increased sevenfold since the 1950s. It predicted still more frequent flooding this century.

In Iowa, soaked by its wettest 36-month period in 127 years of recordkeeping, floods from three nights of rain this week forced hundreds from their homes and killed a 16-year-old girl. The international climate panel projected increased US precipitation this century, except for the Southwest, and more extreme rain events causing flooding.
© 2010 Associated Press
Posted by David Thoreson at 8:57 AM 3 comments: